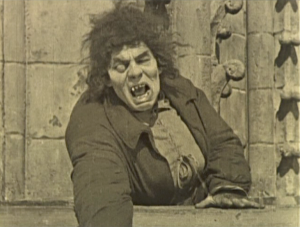 My reaction after my first attempt at cooking a whole beef tenderloin…not the worst meat I’ve ever tasted, but I was disappointed. Lessons learned.

So I pretty much looked like the 1923 Hunchback of Notre Dame Lon Chaney after my first attempt at cooking a beef tenderloin (If you must ask how I know about Lon Chaney–>night shift…insomnia…silent movies to avoid waking Grumpy Kevin. There.).  Now, I may not have had that snaggle tooth or that 1/2-of-a-ping-pong-ball eye, but it was pretty damn close.  After spending that much money on a hunk o’ meat, if it doesn’t turn out how ya were dreaming’, you pretty much freak the h-e-double-hockeysticks out!

So, what happened you innocently ask?  Well, I followed the advice of the interwebs instead of my gut.  I mean, tenderloin is a b-e-a-u-tiful piece of meat. Seriously, it smelled better than most steaks while it was completely raw!  It smelled so good the dogs were doing the “dancing circus bear’ next to the counter. You know, where they stand up on their back legs, front arms just a danglin’, dancing around on their back feet to avoid falling over, head turned up, nose in the air. Yeah that. Anyway, I digress.  A good tenderloin is beautiful.  I knew in my heart-of-hearts that I should’ve have honored that beauty and let it shine by treating it simply. But oooohhhhh nooooo–I had to get all cray cray.  Good  God, it was like dressing up a sweet, little, innocent bride in a 1980’s hairmetal Kiss costume. I mean, brides are beautiful, Kiss is awesome….so, ipso facto…brides in Kiss costumes should be magnificent. Not so, people. You might stare in wonder, but not the good kind. I made the same mistake by marrying beef tenderloin and an herbal brine. The horror. The travesty. Mea culpa.  Thank goodness there was plenty o’ wine before we ate.

I was so peeved, I tried again the next weekend. We went to Dad’s, invited Tom and Cindy over again, and got to it.  This time we went to the opposite end of the spectrum…almost nothing.  A little salt, a little pepper, a bit o’ spice, some oil, and fire.  What a difference! It was meat like caveman must’ve eaten…a bit of a crust on the outside, medium rare on the interior, perfect.  There was almost absolute silence at the table as we ate. Enough silence for me to say a short prayer of thanks to my Caveman Homies for their genius in discovering and propagating fire and deciding to hang meat over it (my schooling as an anthropologist kicks in at the weirdest times).

Let’s get to it people. You’ll want to try this pronto. 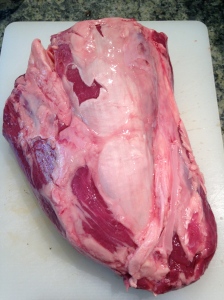 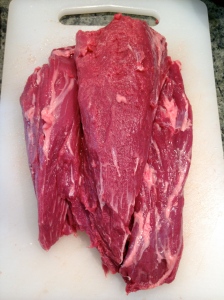 Post-trimming, pre-trussing. I was so preoccupied with the grill that I didn’t get any trussing pics. The link to the video will help with that!

Now, process your spices in your coffee grinder (dedicate this for spices–it’s a WHOLE lot better than a mortar and pestle) until they’re dust. Put a light coating of oil on your tenderloin so your herbs stick.  Evenly coat your trimmed tenderloin in your spice dust, salt, and pepper. Truss your tenderloin.

Now, go get that grill as hot as you can get it, on one side ONLY (I used a gas grill). If you walk away after heating the grill continuing to be the proud owner of eyebrows, I will be disappointed.  Throw your tenderloin on and sear it on all sides. This doesn’t take long.  A minute or so per side. Then move the loin off heat–or onto indirect heat.  Let it rest there until the internal temp reaches about 90 degrees (about 15-20 minutes for mine).  Then pop it back over to the direct heat to finish until the internal temp reaches 110.  This doesn’t take long and really made a good crust on the outside.  Now, don’t freak out about the 110 degrees.  I can only say that when I cooked the first one to the recommended 135 to achieve medium rare after standing, that thing was much too done.  I went by the ‘squish factor’ on this one which happened to be about 110 degrees.

Remove the roast and loosely cover with foil. Let stand 15 minutes (don’t cut it to soon!). 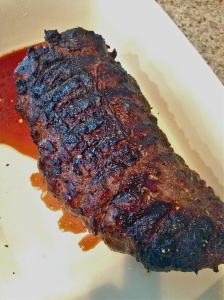 Post-resting. Look at that crust! My caveman forefathers would be proud! 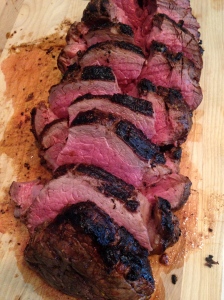 Just what I was looking for! Man was it good!

I think it’s particularly good with a little horseradish sauce.  We make our sauce with sour cream, mayo, horseradish, cream, salt, pepper, garlic, and green onions.  I’ll be sure to add that recipe when we grill up another one.  Now go get down with your caveman roots and enjoy!

So Much Food. So Little Time.

If it tastes good, it IS good.