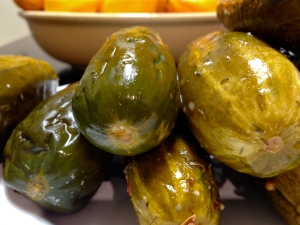 After experimenting with fermenting cabbage and producing a delicious sauerkraut, I turned my sights to fermented pickles.  I can remember my Dad fermenting pickles from the garden in a huge Blue Crown crock.  The fermented pickles always tasted so much better than heat-processed, canned pickles.  The flavor of the spices stood out, the sourness was superior to that produced by vinegar alone, and they stayed crunchy.  I read post after post and tried recipe after recipe and settled on something that combined the best of all of them.  They really did turn out superbly–a little spicy, a little garlicky, and a whole lotta crunchy.  No limp, squeaky, bland pickles here!  Best news, unlike other ferments that take a month or two, this one took only 9 days to produce a fantastic pickle! 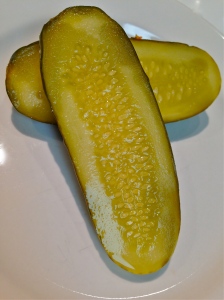 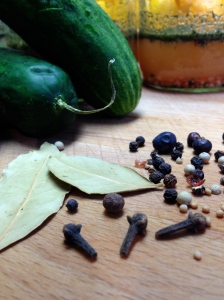 I finally settled on just a few spices but the options are nearly endless. 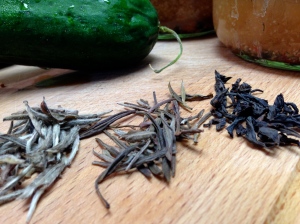 Tannins keep fermented pickles crisp. Not having access to a steady source of grape or oak leaves, I turned to tea leaves. I tried several varieties and settled on green (oolong is a good option too). 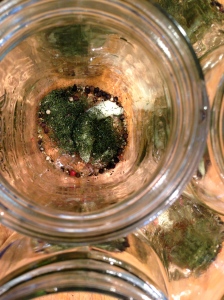 Load your choice of pickling spices in the bottom of the sterilized quart jars. 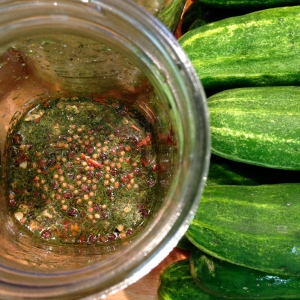 Try out a variety of spices–here was a trial run with added mustard seeds.

Pack with cucumbers (usually about 4 or so fit).  Cover cucumbers by about an inch and a half with brine.  Save the remaining brine and place in the fridge in case jars need to be topped off during the fermentation period. 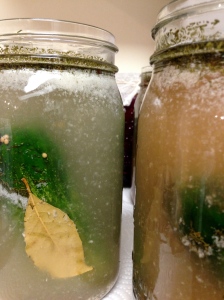 Cucumbers packed into their jars and covered with brine. Here you can see different spice experiments caused different colorations in brine. 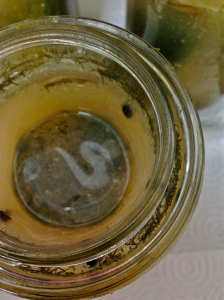 A small jar weighs down cucumbers to keep them below the brine’s surface. 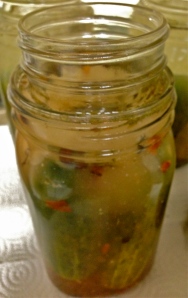 A 4 oz canning jar fits just inside a wide-mouthed, quart canning jar to keep cucumbers below the pickling brine’s surface. It’s a great option if you don’t need a large pickling crock’s worth of pickles

Place a square of cheesecloth over each jar and secure with kitchen twine to keep dust out. Keep your jars at room temperature and away from direct sunlight.  Check daily to make sure cucumbers are covered in brine, top off if necessary, and skim any scum that might form.  If the cheesecloth gets damp, replace it.  The brine will get cloudy and bubbles will form, and the cucumbers will turn from the bright green of a cucumber to the darker, olive-green color of a pickle. Mine were perfect at 9 days, but taste as you go and move them to the fridge when you achieve the flavor you want (sources say the cucumbers can sit for up to 21 days at room temperature).  Voila! Easy fermented pickles!