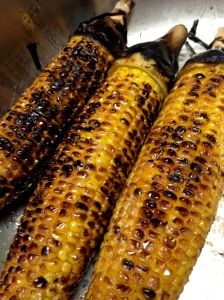 Being married to a Nebraska Boy, corn takes a special place in our house. We don’t eat it often, so when we do, it’s gotta hit the spot and hold you over until the next round.  Now, I don’t discriminate when it comes to corn–I love it all. Creamed, boiled, steamed, or grilled in the husk. But we’d had grilled corn when we were out and about that was nothing short of awesome.  It was sweet, corny, and speckled with little charred spots.  But trying to reproduce this at home by way of grilling in the husk just didn’t produce the same effect. Finally we tried just slapping it on the grill sans husk.  Perfecto!  You can add lots of things to it (paprika, sour cream sauce, cheese, japapeno, etc.), but I think plain ol’ butter does the trick. This stuff is a great pair for anything grilled.  Bonus?  The dogs love, love, love to pick the cobs and get all the little bits off (Be careful to not let them eat the cob–it can’t be digested and can cause problems)!  Not to mention it’s hilarious to watch them munch off the leftover kernels typewriter style. Happy dog and happy Cornhusker = Happy life!

Score the husk near the bottom of the cob with a pairing knife. Remove the husk and silk. Place on a hot grill, turning occasionally, until the kernels darken a bit and char spots appear.  Remove from the grill, brush with butter, and sprinkle with salt. Dig in. Don’t forget to share with your furry buddies (just make sure they don’t get ahold of the cob!). 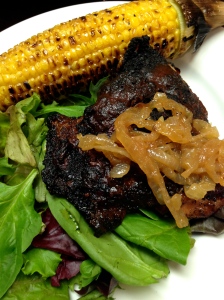 Grilled corn pairs well with just about everything!