Some may think making your own yogurt is just for the ‘Granola’ folks, but trust me, you will want to try it at least once (and by then you’ll be hooked).  Way back in the late ’70s I can remember my Mom hollering after my brother and I ‘not to bump the yogurt’ as it sat nested in it’s tidy little yogurt maker.  I could never understand why she just didn’t buy it from the store, after all, wouldn’t that be so much easier?  Sure it would be easier, but you’d miss out on all that fun kitchen chemistry (or microbiology) and some seriously good eats.  Although I always liked yogurt in my adulthood, I never loved it until I made it myself.  I’ve tried a gazillion methods of heating and incubating the yogurt and have settled on a low-tech, fairly hands-free method that turns out beautiful yogurt every time.  Follow these easy steps and you too can take yogurt to a whole new level.  Local antibiotic- and hormone-free milk can offer increased flavor (and decreased toxins) but if you don’t have access to it, opt for pasteurized and not ultra-pasteurized and homogenized milk ( the latter won’t firm up). You can also decrease the quantities in this recipe, but I find a gallon at a time keeps me in yogurt without having to make it too frequently.

Heating the milk in the jar prevents scalding while the dish towel prevents the jar from jostling. Holding the temperature at 150-160 degrees for 20-30 minutes seems to produce a thicker yogurt.

You can see the yogurt has set up to where it pulls away from the side of the jar. The liquid is whey, which can be saved for other uses, stirred in, or drained off for a Greek-style yogurt. 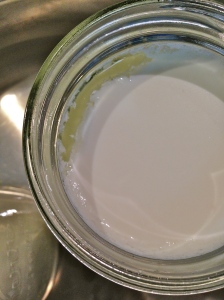 Again, you can see the yogurt has firmed into a soft curd and some of the whey has separated.

Almonds and local, raw honey on top of your homemade yogurt makes for a great treat!

One thought on “Easiest Homemade Yogurt”